Dercum's Disease - HealthJunta.com - We are Junta of Health & Medical
Skip to content

Dercum’s Disease  is the presence of painful lipomas in subcutaneous fat tissue. The predilection site of lipomas are the knees. It is more prevalent in female population than in men, and it is more common in perimenopausal women.

The average age of the onset of Dercums disease is between 35 and 50 years. Lipomas do not posses a specific capsule. Ocassionally, they may have an excessive connective tissue or be in the form of angiolipomas.

Dercum’s disease is characterised by the slow formation of multiple, painful subcutaneous nodules with the centralized fatty tissue. The pain is described as the presence of moderate discomfort during the basic movements.

Dercum’s disease is described as the presence of generalised overweight seum obesity, prominent pain and adipose tissue. The presence of pain is often more than 3 months, thus referred as chronic. It is symmetrical, disabling by its intensity and not responsive to conventional analgesic medicaments. (1)

It has been concluded that Dercum’s disease has a hereditary component and autosomal dominant pattern of inheritance. 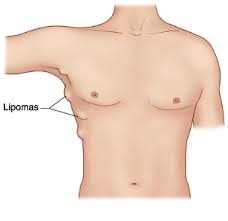 It mostly occurs due to a novel mutation, thus there is no positive record in the family history.

Lipomas in Dercums disease ar of small diameter and their presence is necessary in order to diagnose a disorder.

There are several types of nodules described as follows: 1. Diffuse lipomas of small diameter, mostly palpated by rolling the fingers above the fat tissue; 2. Nodular: lipomas of emdian size, such as marble or larger, localized primarily on the upper extremities, anterior rib cage, abdomen, lower back parts, gluteal region and thigh; 3. Mixed lipomas are combination of diffuse and nodular lipomas. 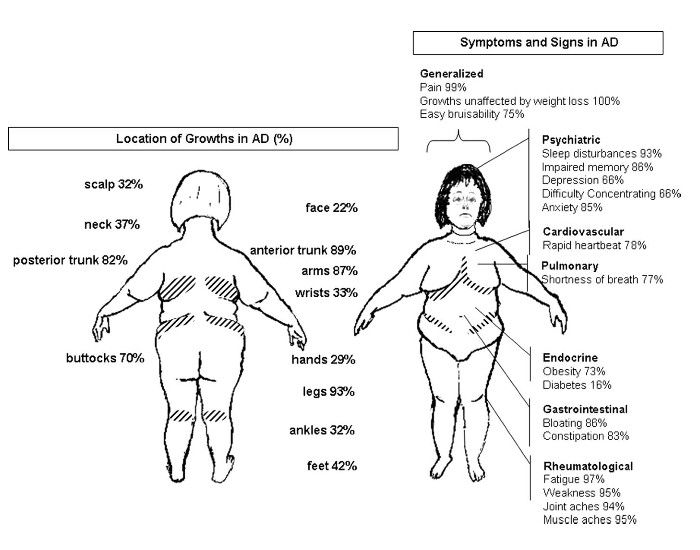 Dercum’s disease is similar to fibromyalgia but with the exception of painful lipomas. (1)

Researches have suggested that the nervous system dysfunction may play an important role in the onset of pain in Dercum’s disease. The autonomous nervous system is labeled as the initial trigger of the pain. It is due to the sympathetic nervous efferent fibers, thus in certain cases sympathectomy may be of benefit. (2)

There is another causative factor described such as a local defect in lipid metabolism. It has been shown that fatty acid biosynthesis might be impaired, especially in the production of monounsaturated fatty acids in individuals with Dercum’s disease.


The inflammatory process in Dercum’s disease is characterised by the increased inflammation markers – erythrocyte sedimentation rate and C reactive protein.

There are certain complications that aree indicative of Dercum’s disease such as increased blood clotting, fat emboli, fatty heart, higher incidence of cardiovascular disorders and lymphedema.

Diagnosis is based upon clinical examination and thorough exclusion of possbile differential disorders.

The presence of pain is required for an adequate diagnosis. The pain is present in lipomas and in skin – hyperalgesia. The pain is of migratory character and after several years it may become numb and disabling. In certain cases, arthralgias and myalgias are present.

In individuals with Dercums disease, there is a noted increased oxygen consumption, decreased fatty acid desaturation and reduced glucose conversion to neutral glycosides.

Ultrasound may be a good diagnostic option if guided an experienced healthcare individual. The majority of lesions are seen as <2 cm in maximum diameter and as hyperechogenic. Doppler ultrasound shows no increase in flow.(3)

There are several treatment modalities of Dercums disease.

The resection of lipomas decreases the intensity of pain, but recidivs and seromas are frequent. The liposuction procedures are of use, thus they imporve an overall quality of life.

The use of infliximab, methotrexate, interferonalpha-2b induces pain relief in hepatiis C individuals. 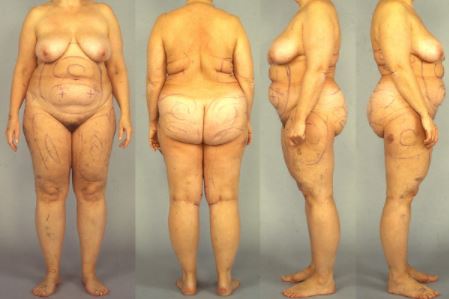 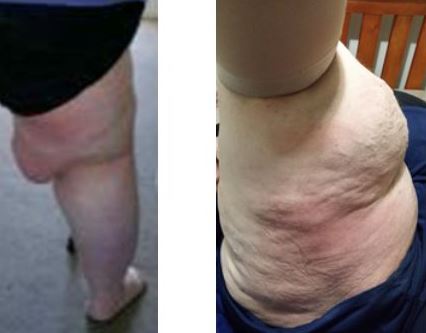 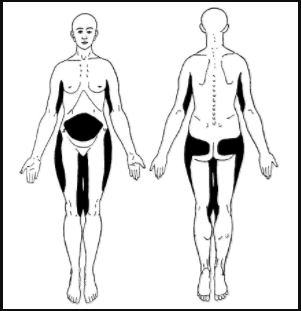