What Is Metatarsal Fracture?

Metatarsals are the five long bones of the midfoot. A Metatarsal Fracture occurs when one of these long bones is broken due to stress fracture (repeated stress), or due to an acute fracture (sudden injury) which normally affects sportsmen.

Acute fractures are associated with a sound when breaking, pain, swelling, bruising and difficulty in walking. Stress fractures share similar signs except for the bruising. 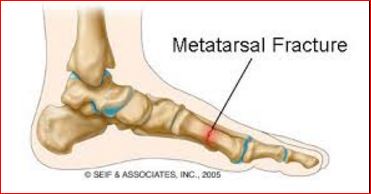 Anatomy of your foot

The foot consists of multiple bones, muscles, tendons and soft tissues. The foot has 26 bones:

Each Metatarsal normally consists of a base which is adjacent to the heel, a shaft which consists of the straight part of the bone, a head and a holding neck..

The fifth Metatarsal Bone has slight differences as it has a bulging (tuberosity) at its base. Your foot’s bones, ligaments, and tendons form arches, one lengthways and one across the foot known as the longitudinal and transverse arches. They allow your foot to hold up the weight of your body.

The metatarsal bones are some of the most commonly broken (fractured) bones in the human foot. There are two main types of this kind of fractures:

Metatarsal fractures easily occur if the metatarsal bones weaken as a result of ‘thinning’ of the bones (osteoporosis).

Generally, fractures can be: 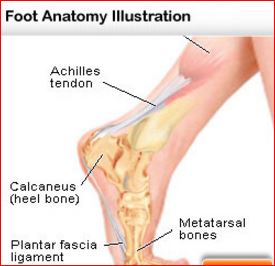 Acute fractures normally result from direct injury as a force acts directly to the foot. Twisting of the foot or the ankle can result in fractures of the base of the fifth metatarsal as well.

In this injury, the twisting mechanism pulls on a strong ligament attaching to the base of the fifth metatarsal then pulling off a fragment of bone. The shaft of the metatarsal is mostly injured due to twisting of the foot upon landing from a jump. 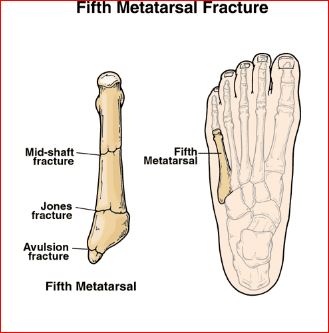 You may hear a sound when breaking, with an immediate pain and tenderness around the area of the fracture. Movement of your foot may also be limited but the pain can settle within a few hours. The pain is often referred to as ‘pinpoint pain’ as it is quite well localized at the site of impact to the bone.

Bruising and swelling can happen since broken bones bleed and one might experience difficulties putting weight on the affected foot.

Can be identified through the use of;

This depends on various factors as listed below.

They help in relieving pain. Common painkillers include paracetamol and non-steroidal anti-inflammatory painkillers.

Applying ice to your foot as soon as possible after injury can also be helpful as pain relief. Applying ice for less than 10 minutes have little effect while doing it for more than 30 minutes may damage the skin. Ice should not be put directly next to skin, as it may cause ice burn but should be wrapped instead.

The ice pack should be gently pressed onto the injured part. This relieves pain since the cold reduces blood flow to the damaged ligaments.

This is normally keeping the foot on a chair to at least hip level when sitting or put your foot on a pillow to reduce swelling when in bed.

Resting may be the only treatment required even in a traumatic fracture.

This may require the use of crutches or even a wheelchair as it is important to remove any stress from the foot for healing.

Some fractures just require support to heal like a supportive Tubigrip®-type dressing with a supportive, rigid shoe. Other fractures need a below-the-knee plaster cast treatment.

Surgery may be a necessity in, for instance, re-aligning any part of the bone that may have slipped out of position.

This includes physical therapy and a gradual return to exercise. They are normally considered as a part of good follow-up care.

It normally takes around six to eight weeks for acute metatarsal fracture to heal but may take longer than this for a sportsman before embarking fully back into action.