Myxedema - Definition, Symptoms, What is, Treatment, Pictures
Skip to content

Myxedema is an ailment that is characterized by a thickened and enlarged skin. The condition is prompted by the reduced production of the thyroid hormone by the thyroid gland. Myxedema is merely brought about by hypothyroidism. 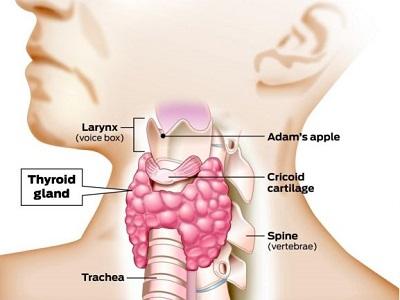 The primary function of the thyroid gland is to check the rate and level of metabolism. Myxedema is just but one of the many symptoms of a defective thyroid gland.

Hypothyroidism mostly affects women, but a considerable number of male infections have been recorded over the years. Mostly the ailment touches older women. There are a number of causes that are a purported to bring about the condition. These include:

In the earlier stages, the disease is branded by severe symptoms of distress which are not only distracting but also disturbing. These may range from:

The condition worsens as it advances bringing about even more intriguing of effects and symptoms. 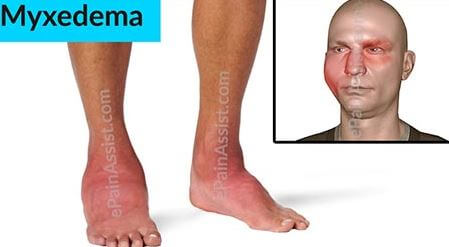 As the symptoms of myxedema persist, so do those of underactive thyroid hormones. Due to the imbalanced rate of metabolic activity, such patients tend to suffer from: 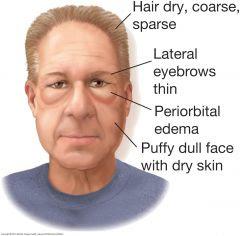 Myxedema’s symptoms are sometimes too challenging and in most occasions weigh heavily on the lives and health of the victims. Patients living with the disease have an enlarged skin which appears rough and swollen.

The skin also seems to be dehydrated and deprived of essential nutrients. This is characterized by the change in appearance turning it to a yellow like color to the extremes of orange. The inflamed skin is a result of a layer of jelly substance concealed under some part of the skin.

The symptoms and severity of the condition is characterized differently among diverse patients. The ailment can either be expressed partially or fully. Rarely does the disease affect partially, legs only, but in most cases affect the body as a whole. In such occasions, the symptoms tend to more severe as the inflammation covers a large percentage of the body cover.

Most people tend to ignore the condition, ruling out its severity, but if the condition remains untreated for long time it might become deadly. Long periods of low thyroid hormones may lead to a fatal condition known as Myxedema coma.

Though not common, this advanced stage is more life threatening than the earlier stages. As most of the symptoms of the condition are physical, checking for the disease is done through physical examination while weighing the signs expressed. However, these symptoms change and develop with time and are more scary and severe.


This advanced stage prompts physicians to look for signs such as: 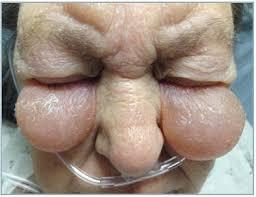 Before concluding that the condition is solely myxedema and not any other ailment, it must be tested against several other diseases that may be characterized by similar symptoms. The conditions to be differentiated are:

As the condition is brought about by hypothyroidism, curing the disease can only then be addressed by root case. This can only be done by inducing thyroid hormones through medical supplements. Appropriate and coordinated use of these medications help alter and cure the condition completely. Eliminating hypothyroidism is the most crucial of the healing process. However, it is of equal importance to undergo other treatments in order to lessen the effects of the symptoms. These include:

Compression stockings – These help reduce the swollen skin, compressing it to its original nature.

Thyroid replenishing hormones- This treatment is used to address the symptoms that come with myxedema as well as any underlying issues of hypothyroidism. Despite this method being successful in its control against the ailment, its application must be informed and only applied after deducing the root cause of the disorder. Failure to be aware of the problem could lead to administering of supplemental hormones but no changes are observable. In the long run, this leads to hyperthyroidism, a worse of condition.

Despite thyroid supplementation being recommended, it is a routine the patients have to put up for life as it’s not a curative. However, there are more suitable options to address the disease other than hormone replacement. These are:

If the condition not attended to, it can develop into fatal stages. Research shows that almost 20% of the reported cases are life threatening and so persons who witness such symptoms should and must not take them lightly.

In instances where myxedema comes parallel with hypothyroidism, patients may experience even further complications such as:

It is essential to get diagnosed early as well as seek treatment before the condition develops and advances throughout the skin. This creates an opportunity to come up with a treatment procedure that will be effective to combat the ailment.

The degree of occurrence and severity is often escalated by several factors. These factor make persons much vulnerable to the illness. These ranges from:

The most ideal manner of dealing with the ailment is doing away with it altogether. This is possible by testing infants for the illness which could prove decisive in averting a crisis of the future.

The best way to manage this disorder is to prevent its occurrence in the first place. Even though there is no specific way to prevent the condition, screening newborns can be effective in diagnosing its early development. Patients with Hypothyroidism should regularly visit their doctor to undergo blood testing and follow-ups to make sure that the replacement dose is suitable.