Tyrosinemia - Types 1, 2 & 3, What Is, Symptoms, Treatment, Causes
Skip to content

Tyrosinemia is a genetic disorder and is caused by the inability of the body to break down amino acid tyrosine, which is a major building block of most proteins.

Tyrosine and its byproducts therefore accumulate in the body organs causing serious health issues. It mostly occurs in infants who, if untreated, die within a year. Most tyrosinemia patients who fail to seek medical attention barely live to the age of ten. 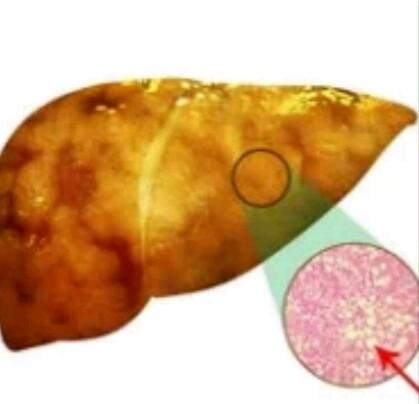 Tyrosinemia as a disorder reveals itself in multiple forms. The signs, symptoms, intensity, diagnosis and treatment are different for each form of tyrosinemia.

The disorder can be broken down into four types namely:5

This is experienced by 10% of newborn babies. It is not brought about by gene mutation.

It is caused by a deficiency in Vitamin C in the baby’s body. It can also be as a result of immature liver enzymes because of premature birth.

When the infant’s blood is tested, there appears to be a higher than normal level of amino acid Tyrosine.

This condition disappears spontaneously on its own in most cases.

Tyrosinemia type I is also known as hereditary infantile tyrosinemia. And, as its name suggests, it is an inherited disease. It is the most severe of the types of tyrosinemia.

The step by step process the body undergoes to break down the building blocks of proteins, amino acids is disrupted. Symptoms of tyrosinemia type I begin to show within the first few months of life.

For a child to have tyrosinemia type I, they must inherit two copies of the non-working TYR gene from each parent. When food is ingested, it is broken down to pieces the body can absorb through the process of digestion.

Tyrosine is broken down by an enzyme called fumarylacetoacetate hydrolase (FAH). Lack or inadequate amounts of FAH mean that tyrosine will not be broken down and will consequently accumulate in body organs, which can be toxic.

Why Does FAH Enzyme Become Absent or Fail to Work Correctly?

This may arise because of the way genes work in body. Genes are responsible for telling the body to synthesis various enzymes. Whenever there is a gene related to enzyme production that is not working properly, this situation may cause FAH to be absent or not work correctly.

The first test is a blood test to check for the disorder. Should the results be way out of range a confirmatory test is done? Blood and urine samples are taken.

They will be checked for excess amounts of toxins and acids which are signs of tyrosinemia type I. Sometimes a skin sample is used.

A diet will be put in place by a nutritionist or dietician ensuring that the baby does not consume proteins that his or her body cannot break down.

These should in most cases be adhered to through adulthood. A diet containing foods that have low tyrosine and phenylalanine are recommended.

The child is limited foods like regular formula or cow’s milk. He or she is limited to take dried beans, flour, peanut butter, meat, cheese, and eggs because these foods contain the amino acids.

Administration of a medicine called Nitisinone or Orfadin. This medication prevents the TYR1 from causing damage to the liver, brain, and kidney.

These supplements are given if the bones of the baby are being affected by the disorder.

These tests will check for things like nitisinone levels, kidney and liver function, amino acid levels, and succinylacetone. Such tests can help a doctor to determine of medication and diet are helping or not and if changes are needed.

This may be an option if a child shows signs of liver failure or cancer. Liver transplantation has however diminished with the introduction of nitisinone, which reverses or prevents most liver problems and reduces the risk of a child developing liver cancer.

Nitisinone administered to a child with tyrosinemia type I is able to delay or even prevent the need for having a liver transplantation. 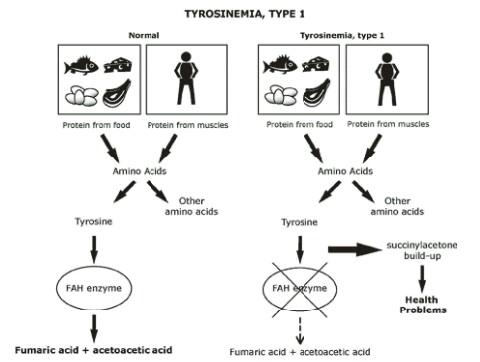 It is an amino acid disorder also known as Richner- Hanhart Syndrome that affects mental development, the eyes and the skin. The signs appear during early childhood. 50% of children who are affected by tyrosinemia type II end up being intellectually disabled.

This causes tyrosine together with phenylalanine and methionine to build up in the body.

Should a baby be showing symptoms of tyrosinemia type II, a screening test is done. Confirmatory tests are done if the results of the first step were positive. Blood and urine samples are investigated for excessive toxins.

Foods containing amino acid Tyrosine, Phenylalanine and Methionine should not be included in the diets of the patients.

Administering of a medicine called NTBC, which helps lower the level of amino acids in the blood.

Tyrosinemia type III is the rarest of all the forms of tyrosinemia.

It is caused by the inability of the body to break down amino acid Tyrosine. The enzyme that promotes development of tyrosinemia type III is called 4- hydroxyphenylpyruvate dioxygenase (HPD). Either the HPD produced is not working or is being produced in very low amounts, which consequently results to amino acid not being broken down. It is instead converted to homogentisic acid, which is very dangerous.