What Is Diaphragmatic Breathing?

Unknown to many people, there are different types of breathing that humans perform. One of these is diaphragmatic breathing and involves the use of the diaphragm muscle. It is said that this type of breathing promotes relaxation and benefits those with a chronic obstructive pulmonary disorder (COPD) [1, 2, 3, 4].

The action of breathing or respiration occurs as a result of the changes in the pressure of the air inside the lungs and the atmospheric pressure. Inhalation involves contraction of the intercostal muscles and diaphragm to expand the chest cavity.

The diaphragm moves downwards while the muscles of the intercostal ribs move upwards and out. The expansion of the chest cavity will result in the reduction in the air pressure from the lungs.

Due to the lower pressure, air from the outside would rush inside the lungs to equalize the pressure. Upon expiration, the diaphragm and the intercostal muscles would return to their resting position and decrease the size of the abdominal cavity.

This will increase the air pressure inside the lungs and would force the air out in the atmosphere [5]. Figure 1 shows an illustration of the mechanism of breathing. 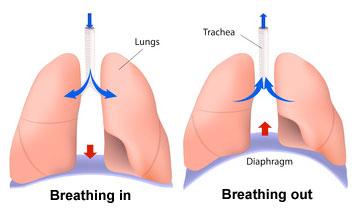 Figure 1- The mechanism of breathing

There are different types of breathing that a human can perform. They differ in the muscles that are used to expand the respiratory cavity [1].

Engaging the diaphragm in breathing is preferred because of the several health benefits this provide to the body [6].

Performing diaphragmatic breathing reduces the heart rate and breathing rate. It changes the sympathetic fight or flight response of the body to a more relaxing parasympathetic response [6].

Diaphragmatic breathing reduces the tension and tightness in the muscles of the neck and shoulders and causes a relaxation of these muscles [6].

Engaging the diaphragm in breathing can contribute to the development of good posture and improve the strength of the core muscles [6].

The technique of performing the correct diaphragmatic breathing is as follows [2]: 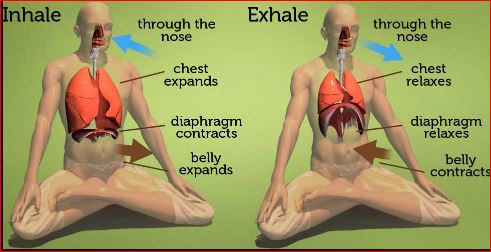 Look for a bed or a flat surface where you can lie on your back. The knees should be bent and the head should be supported with pillows. Another pillow can be placed under the legs for additional support. One hand will be placed in the upper chest while the other below the rib cage.

The placement of the hands will allow the diaphragm to be felt while it contracts and relaxes. During inspiration, the stomach should move out against the hand below the rib cage. The hand on the upper chest should stay as still as possible.

Upon expiration, the muscles of the stomach should be tightened and the air should be released through pursed lips. The hand on the upper chest should stay still on this part as well [2].

Sit comfortably with the knees bent and the head, neck, and shoulders relaxed. One arm should be placed on the upper chest and the other hand placed below the rib cage in order to feel the movement of the diaphragm. Inhale slowly through the nose and the stomach should move out against the hand.

Performing diaphragmatic breathing may require an increased effort at first and may be tiring. But with continued practice, this would become easier and will be automatic [6]