Pompholyx is also known as vesicular endogenous eczema or dyshidrotic eczema. It is a form of skin disease that is characterized by the development of deep blisters on fingers, soles, and palms of the affected individual.

Pompholyx can be classified into two groups:

It is more common in females than men and mostly affects young adults. In most instances, pompholyx disappears on its own within a matter of weeks. Recurrence is however common. In some cases the disease is continuous making treatment quite a challenge. 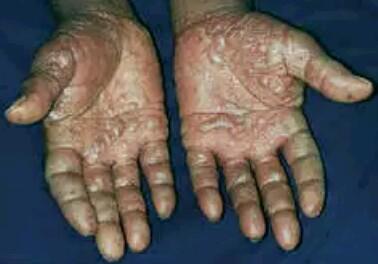 There are several factors that could lead to one getting pompholyx, and they include:

50% of the people who get pompholyx have a family history of the disease or atopic eczema.

Stress has been discovered to be a contributing factor in the acquisition of dyshidrotic eczema.

Whether on site (palms or toes) or far away like in between the toes. These are fungi that use keratin for growth and thus attack the skin, nails and hair of the affected persona.

These fungal infections are passed through body contact of people, animals and soil organisms.

Friction can lead to formation of deep seated blisters.

An adverse reaction to immunoglobulin therapy can result in pompholyx.

Coming in contact with irritants like water, detergents, perfumes, cosmetics, shampoo, solvents, household chemicals and the likes can lead to one getting pompholyx.

Contact with allergens especially Nickel is a major red flag.

A person with pompholyx will show the following signs and symptoms: 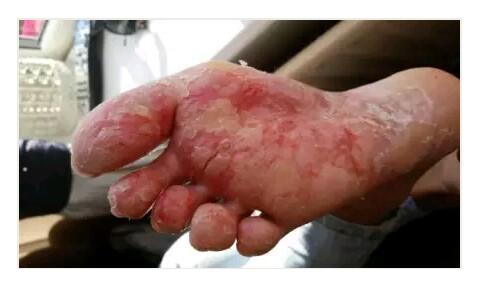 Diagnosis of dyshidrotic eczema is generally done through observation of clinical symptoms.

This is however not accurate since bullous impetigo, herpetic whitlow, bullous pemphigoid, pustular psoriasis, contact dermatitis and hand foot and mouth disease have similar clinical symptoms. For this reason, further testing in the lab is done.

In cases where the underlying cause of pompholyx is suspected to be fungal infections, skin is scraped for the purpose of mycology. If the physician suspects the causing factor is an allergen, patch testing is done to confirm. This is, however, done only in chronic cases.

A skin biopsy can also be done. This process involves administering of local anesthetic, removal of a skin sample for testing and dressing of the site where the skin was taken.

Treatment can be quite difficult in recurrent cases. It is based on management of pompholyx causative factors.

The first thing to do is simply avoiding contact with irritants. Gloves can be used when the person wants to do unavoidable tasks like shampooing their hair or house cleaning.

Avoid contact with nickel and nickel coated items or any other allergen that might be causing or aggravating the pompholyx. Instead of using soaps, which leave the skin dry, emollients, commonly known as moisturizers, are recommended.

Other treatment options include the following: