What is Pelvic Pain?

Pelvic pain occurs on the body location below the belly button within the anterior lower abdomen and may extend to the sex organs. This kind of pain can arise due to many conditions and diseases. And while pelvic pain is often used to refer to pain occurring in the region of internal reproductive organs of women, it can also be present in men.

Pelvic pain could be a symptom of an infection. It may also stem from pain occurring in the pelvic bone or pain occurring in non-reproductive organs including colon and bladder. In women, pelvic pain could as well indicate that there is a problem with reproductive organs found within the pelvic area such as the vagina, ovaries, fallopian tubes, uterus, or cervix. 1,2,3,4,5 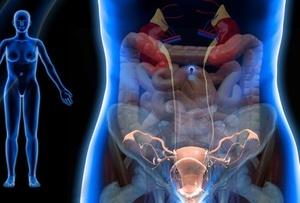 If you have pelvic pain, it should be investigated by a medical doctor. There are many causes related to pelvic pain and they could range from bladder problems, appendicitis, normal menstruation to irritable bowel syndrome. Here are the possible causes of pelvic pain:1,2,3,4,5

This is an inflammation or infection of a person’s appendix. When you have appendicitis, it can produce pain in the lower right side of the pelvic or it could lead to abdominal pain. In this case, the pain occurs along with other symptoms like fever, vomiting, and nausea.

If you have short term pain occurring for just hours during ovulation, it may lead to pelvic pain. Ovulation occurs when egg is released from the ovary. The medical term for painful ovulation is mittelschmerz. The pain may occur just before or at time of ovulation and mainly happens because the membrane covering the ovary tends to stretch when the egg is being released. Also, the fluid and blood released in time of ovulation could result in pain and discomfort.

Also referred to as IBS, irritable bowel syndrome manifests with symptoms like bloating, painful cramps in abdominal and pelvic area, diarrhea, and constipation. IBS is a chronic functional disease that has recurring symptoms.

There may be pain occurring when the uterus contracts so as to remove the endometrial lining and blood that tend to accumulate monthly if an embryo has not implanted in the uterus. The pain could last for about 7 days during menstrual cycle of women.

Also referred to as PMS, premenstrual syndrome causes longer term pelvic pain in the days before menstruation occurs. PMS causes discomfort within the area outside pelvic region such as headaches, low back pain, and tender breasts.

These are fluid-filled areas forming within the ovary. They occur when fluid accumulates because follicle has failed to release an egg or if follicle has reclosed after the release of egg. Symptoms of ovarian cysts include irregular menstruation, sharp pelvic pain, pain after having sex, and pelvic pressure. With large cysts, there can be painful urination.

Also referred to as PID, pelvic inflammatory disease is an infectious disease. PID may occur as a complication of STDs like gonorrhea. When not checked, it could cause damage to the ovaries, fallopian tubes, and the uterus. Common symptoms of PID include pelvic pain radiating to a patient’s abdomen area, pain when having sex, and abnormal vaginal discharge. If not treated, PID could result in infertility, chronic pelvic pain, or ectopic pregnancy.

This occurs when the embryo grows outside the uterus. Ectopic pregnancy can cause sharp pelvic pain that occurs on one side of body. The pain may be accompanied by other symptoms like nausea, vaginal bleeding, and dizziness. This condition can be treated if it is detected early, however, if the fallopian tubes rupture or if there is bleeding, it becomes a medical emergency and surgery may be required.

These are tumors growing in the uterine wall – they are mostly benign tumors meaning never cancerous. Uterine fibroids may cause pelvic pain that is mild, moderate, or even severe. They could cause pain when having sexual intercourse and may disrupt the ability of a woman to conceive. Uterine fibroids may also bring about pelvic pressure pain.

Also referred to as UTIs, urinary tract infections may result in pelvic pain. UTIs may have symptoms such as painful urination or dysuria, lower pelvic pressure, and frequent urge to urinate. Where kidney is involved in an UTI incident, a patient may have flank pain along with nausea and fever.

There may be other causes of pelvic pain and they include:

An individual having pelvic pain may have other symptoms such as:3

To diagnose pelvic pain, a doctor may ask questions regarding the symptoms and if the patient has had any past medical problems. The diagnosis may involve: 3,2

Treating pelvic pain will vary based on the causal factors and how intense the pain may be. Some of the treatment approaches applied include:1,2,3