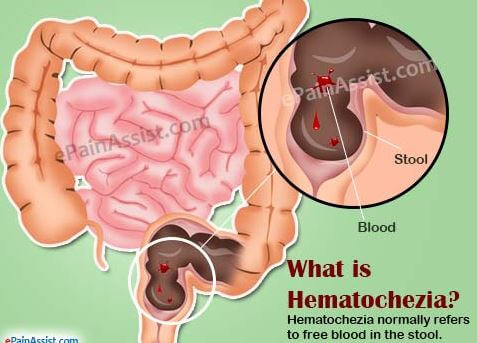 It is always associated with a bowel movement. Bleeding from the anus without a bowel movement may be a symptom of other medical conditions, but is not hematochezia. Most of the time, hematochezia is a sign of hemorrhoids or other benign condition; sometimes, it can be an indication of a more serious condition, such as cancer.

(from the Greek, meaning, “to defecate blood”) he-muh-toe-KEEZ-ee-uh or hem-at-uh-KEEZ-ee-uh

To best understand hematochezia, it is helpful to have some understanding of the gastrointestinal (GI) system. The GI system is the part of the body that ingests, digests and absorbs nutrients and gets rid of waste products. It is composed of many organs. Different aspects of the digestive and waste elimination processes occur in each of these organs.

At the beginning of the GI system is the mouth. Digestive actions start in the mouth, where chewing and the work of enzymes start to break down the food or drink that is taken in. Food and liquid then travel to the stomach by way of the esophagus, where stomach acid continues digestive action and nutrients begin to be absorbed. Nutrient absorption then continues as foods enters the duodenum and the small intestine. In the large intestine (colon), water is absorbed and the process of eliminating waste products begins. Waste products pass through the rectum and leave the body via the anus.

Hemorrhoids are enlarged blood vessels in the rectum and/or anus. They most typically become enlarged as a consequence of constipation (feeling like one has to have a bowel movement but is unable to go, often for several days in a row). Hemorrhoids can cause itching, burning, and pain, particularly when having a bowel movement.

External hemorrhoids are hemorrhoids which protrude out of the anus. They feel like a soft or fleshy “bump,” and can be distressingly uncomfortable, if not painful. When constipation occurs, the stool is rather hard (and therefore difficult to pass) and may injure the hemorrhoid, causing bright red blood to be seen in the toilet, on the stool, or on toilet tissue.

Less common but potentially more dangerous conditions that may cause hematochezia include colorectal cancer, irritable bowel disease, polyps in the rectum or colon, or diverticulosis. These more concerning conditions often have other, concurrent symptoms, such as changes in bowel habits, abdominal pain, and weight loss. Because of the potential for serious underlying conditions, any bleeding from the anus should be evaluated by a health care provider. Evaluation may include a digital rectal exam, anoscopy, sigmoidoscopy or colonoscopy. 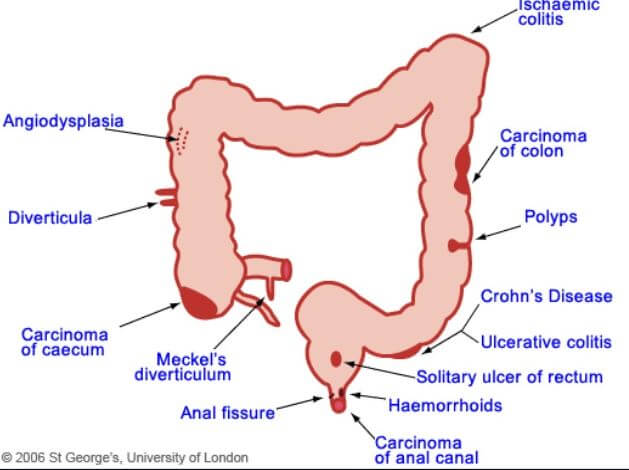 The most obvious sign of hematochezia is seeing bright red blood in the stool, in the toilet or on toilet tissue upon wiping. Pain while having a bowel movement is often associated with hematochezia. 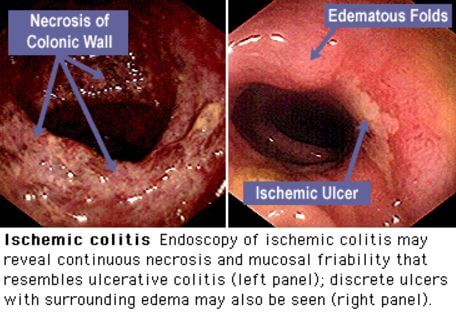 Treatment of hemochezia requires treating the underlying cause of the bleeding.

Hemorrhoids may initially be treated with steroid containing hemorrhoid cream, and attention to diet to reduce constipation. In more severe cases, hemorrhoids may require banding or more invasive surgery.

Since trauma can be caused by constipation, measures to reduce constipation are recommended. Eating a diet higher in fiber, maintaining adequate hydration and getting exercise are imperative. A stool softener, such as docusate sodium can also be used.

Polyps in the colon (a precancerous condition), once identified, can be surgically reomved. Colon cancer may require a combination of surgery, chemotherapy and radiation treatment. Irritable bowel disease is managed with diet and medication. The choice of medication depends on the site of inflammation. Diet and medication are used to manage diverticulosis before invasive surgery is considered.

Hematochezia should be differentiated from melena. Melana is the passage of large amounts of black tarry-looking blood through the anus. Melena is usually from bleeding that occurs higher in the digestive tract, such as in the stomach or small intestine.