Osteophytosis - What Is, Treatment, Knee, Causes, Spine
Skip to content

Osteophytosis represents as an lateral outgrowth of bone at the borderlines of the articular surface of a synovial joints. Its formation is a specific for the osteoarthritis that leads to the deformities and restricted movement of corresponding joints.

Osteophytosis is usually referred to as osteoarthritis of the spine. The condition is very common. In general, the onset of osteophytosis process is indicative of the process of physiological aging.

Osteophytes are formed as part of the physiological aging process. They are frequent in the individuals with osteoarthritis. Osteophyte formation is associated with the instability of joints, their growth and adaptation to injury.

Osteophytosis is mostly present in the cervical and lumbosacral regions of the spine. The lesions are visible as interertebral spurs near joints.

The formation of the osteophytes is mostly linked to the osteoarthritis. Thus, osteophytes are a bony outgrowths that are created at the margins of the corresponding joint.

The mechanism of osteophyte production is endochondral ossification process. Still, the exact etiopathogenetic mechanism is still unknown.The osteophyte maturates at the junction of the cartilage and synovial tissue in the corresponding joint.

It has been concluded that perlecan (Hspg2), a heparan sulfate proteoglycan, is found in numerous extracellular tissues, especially in cartilage. It posses a vital role in the skeletal maturation and disorders. Perlecan is involved in cell growth, differentiation and signaling pathways.

Perlecan has the proangiogenic, proliferative and migratory signals as a response to growth factors. 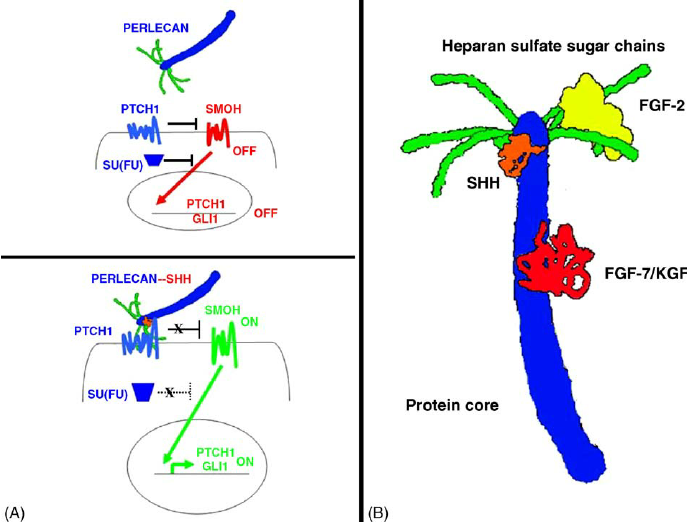 If the level of perlecan is decreased, there is a lower cell proliferation and chondrogenesis.

When the expression of macrophages in synovia is adequate, the formation of osteophytes is inhibited.

There are three main types of cells in bones that are responsible for the formation, resorption and remodeling of bone. Osteoblasts are found on the bone surface and produce type I collagen, proteins and molecules of the matrix.

Osteoblasts arise from multipotential mesenchymal stem cells that reside in the marrow. They differentiate as response to local growth factors – proteins and FGFs. Such cells proliferate and transform into preosteoblasts and mature osteoblasts.

In the regions of synthesized matrix there are clusters of osteoblast cells. The process of mineralization lasts for about 3 to 4 months on average.

Osteocytes are mature osteoblasts that are surrounded by cortical bone. They are no longer capable to produce the bone tissue, but may be stimulated to resorb the nearby canalicular boundaries.(1)

PTH and 1,25(OH)2D3 are stimulate the osteoclast-mediated bone resorption.

TGF-β is of vital importance in the onset of chondrogenesis. Morphogenetic proteins are regulators of the final differentiation of chondrocytes and endochondral ossification in the process of osteophytosis.

Grow either at the peripheral margin of the femoral head or centrally at the margin of the fovea capitis. The osteophyte surface is covered by fibrous tissue that undergoes differentiation and cartilaginous metaplasia.

In the superficial layer there are mesenchymal cells, whilst in more deep parts there are poliferating and diferentiating cells. In the deepest parts, there are mature, round cells with degenerative changes.

Such osteophyte grows in the pattern of enchondral ossification with progressive cellular proliferation, differentiation and production of extracellular matrix. 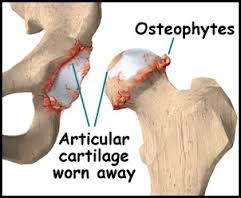 These are characterized by the extensive growth towards the femoral head.

These are present as microscopic regions on new bone. The most common localization is the chondroosseus junction towards the basal layers of degenerating articular cartilage. (2)

The osteophyte is covered with a thin layer of fibroblast-like cells during its period of development.

Osteophytosis is significantly higher in the individuals with osteoarthritis. The most common cause of osteophyte formation is the presence of the pathological stress on the joint margin.

The most commonly affected joint is the hip. There are characteristic radiological findings suggestive of osteophytosis – the formation of osteophytes and the degenerative changes of the femoral head and acetabulum. 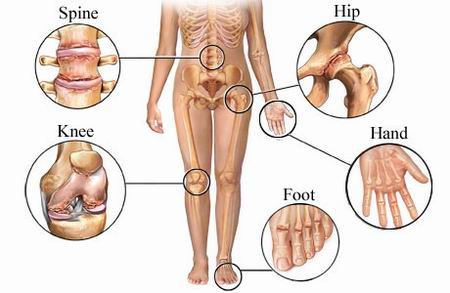 Osteoarthritis is a skeletal disorder characterized by cartilage degradation. The secondary characteristics of osteoarthritis are synovitis and osteophyte formation.

The localization of osteophytes that arise from the periosteum and synovia is on the outer side of the cortical bone in the joint. In osteophyte, the cells enter the chrondrogenesis and differentiation process in order to mature into hypertrophic chondrocytes.

Chondrocytes undergo apoptotic process and are replaced with osteoblasts that create bone with marrow cavities.On the internal and external surfaces of bone there are cellular layers – endosteum and periosteum.

There are two types of bones in adult skeleton – cortical and trabecular. They are composed of the similar cells and bone matrix but with different structure. In cortical bone, the majority of the volume is mineralized, whilst in trabecular bone only 15-25% is mineralized.

Musculoskeletal impairments are linked to the formation of novel bone tissue at two localizations. The first one is the joint margin, where osteophytosis is conducted. Ligament and tendon insertions are the site of enthesophyte formation. (2)

The ossification is the result of the pressure and trauma on the intervertebral ligaments when the nuclus pulposa lacks its physiological elasticity. In that case, bulging occurs on lateral parts of the ligaments and collapsing disk.

In the elderly, there is a noted loss of elasticity of the nucleus pulposus that leads to higher incidence of the osteophytosis.Due to heavy lifting or traumatic injuries the incidence of osteophytosis in the scoliosis regions is frequent.

Certain infections, toxic agents or profesional occupation may cause higher incidence of osteophytosis as well. (3)

Idiopathic skeletal hyperostosis is a condition associated with the formation of osteophytes in the vicinity of large joints.

Osteophytosis is the presence of one or more osteophytes mostly in advanced stage of degenerative disease such as osteoarthritis.It causes joint pain and discomfort while certain movements.

The most common mean of diagnosis is the radiographic imaging of the spine.

Osteophytosis is diagnosed upon radiological findings of spurs of bone in the margins of the vertebral bodies. The term osteoarthritis is not preferred due to the fact that the diarthrodial joints of the spine are located posteriorly. 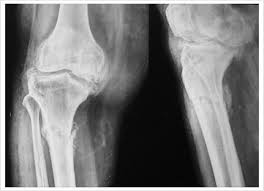 Bone remodelling is the process of replacement of bone tissue. It is most evident along the surfaces of bone, on its endosteal surface.

Upon radiologic imaging, it has been concluded that osteophytes are strongly associated with osteoarthrosis. In individuals with high bone mass, the predominant findings are the presence of osteophytes and subchondral sclerosis.

Researches have concluded that the inhibition of osteophytosis is possible by the administration of certain drugs. In animal models, it has been shown that NSAILs and carprofen may reduce osteophyte formation as well as the size of cartilage defects. The application of biphosphonates is of benefit in osteoarthritic individuals. (1)