Akinesia is a compound word from its prefix word “a” connotes “without” and combining with the Greek word of “kinesis” meaning motion or movement. Therefore, Akinesia means “without movement.”

In Medical aspect of neurology, the akinesia is more specific motor condition where patient is enable or incapacitated to initiate particular motion.

When a person gets affected by this condition, their basal ganglion of the brain is malfunctioning wherein the brain is being affected thus it causes damages in the pathways of nerve signal.

Primarily, it starts with tremors and delayed movement which will eventually results into complete loss of movement. 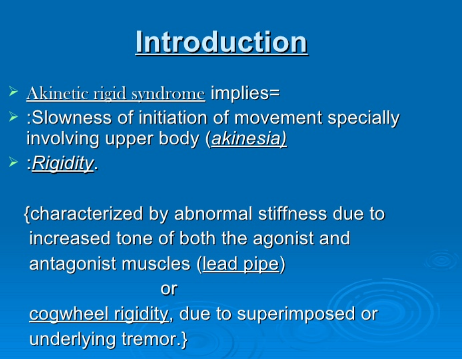 The cause/s of this motor disorder has no definite explanation. However, there are certain situations and drugs that can cause the akinesia. Predominantly, conditions or some medication which triggers the symptoms are associated to Parkinson’s disease and one of the symptoms includes Akinesia and these are;

Usually medications such antipsychotic drugs are usually given to schizophrenic patient and person with severe paranoia. Therefore, it develops symptoms resemble to Parkinson’s disease including akinesia. The patient will initially experience these symptoms several weeks upon the first intake of the antipsychotic drugs.

This condition is rarely occurring in population. Patient with shy-drager syndrome causes deterioration in their body and develops resembling symptoms with Parkinson’s diseases including akinesia.

Usually it involves with synthetic heroin such as MTP (Heroin Pollutant) that causes severe Parkinson’s diseases including Akinesia.

Patient with stroke and atherosclerosis or person having problem in the arteries can cause symptoms similarly with Parkinson’s disease including Akinesia.

The general symptoms of Akinesia involve slowness in movement, delaying movement, tremors, and difficulty to control the motor movements. However, some akinesia patient is apathetic in nature which means patient is indifferent in general. Some of the signs and symptoms may manifest on the onset of the condition. 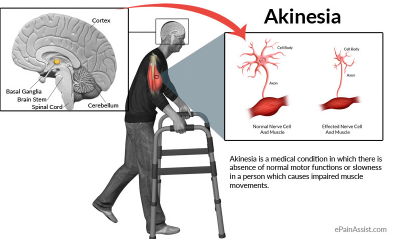 This condition happens in patient with Parkinson’s disease which is subjected to have long-term therapy of Levo-dihydrixyphenylalalnine od L-DOPA.

The akinetic crisis is epitomized by severe disability in movement and to alleviate the condition, patient is administered of iron in a form of ferri-ferro complex through intravenous injection.Essentially, patient is significantly alleviating the akinetic crisis and regained a considerable ability to move.

Fetal Akinesia is categorized by total lack of movement. This happened mainly because of the disorders that eventually results to incapacity in initiating movement. Some of the usual disorder associates are camptodactyly, ulnar deviation, rocker-bottom feet, multiple contractures, facial abnormalities and pulmonary hypoplasia.

This type of akinesia is characterized by pulsion symptoms accompanied by the absence of tremor and rigidity. The pure akinesia is classified by the freezing gait.

It is also described as non-responsive to levodopa therapy. In many publish studies, pure akinesia is being claimed and associated to progressive condition called SteeleRichardson-Olszewski, a typical manifestation of pure akinesia.

Treatment for this condition varies and depends on the underlying medical condition that causing akinesia. These includes;

Patient must seek his or her medical doctor to diagnose accurately the present condition. Condition that is highly suspected similar to Parkinson’s disease must seek doctor’s advice.

If patient is bedridden for long several months, then that person is highly susceptible to develop akinesia specifically in the lower extremities.

Several Pharmacologic therapies can be utilized to alleviate the medical condition of Akinesia and these includes:

It is widely used since then as the most effective medication in treating condition related to impairment of the body brought by Parkinson’s disease which also includes akinesia. Levodopa is a peripheral decarboxylase inhibitor or PDI.

Stands for L-threo-dihydroxyphenylserine; droxidopa, a drug that has been proven to be beneficial in curing with pure akinesia.

According to several publish studies, patient with micrographia including apraxia of opening the eyelid and frozen gait which is present to patients with pure akinesia, by using this drug it was observed that there is a significant improvement in alleviating the condition.

Example of these drugs are “Parlodel, Requip and Neupro). Dopamine agonists are said to cure akinesia. It actually acts by straightly stimulating the dopamine receptors present in the brain, therefore the administration of the dopamine agonist in therapeutic level inside of the body for a certain hours of the day can give remedy to akinesia.