Pseudocholinesterase deficiency is a rare genetic condition where the affected individual has increased sensitivity to several anesthetic agents. The use of these drugs may leave some of the muscles paralyzed [1, 2, 3, 4].

Individuals who are diagnosed with Pseudocholinesterase Deficiency (PD) are highly sensitive to several anesthetic agents. This is an inherited condition and would not be diagnosed until the patient is given the drugs before they undergo a surgical procedure.

The patient experiences prolonged respiratory paralysis after they have been given with a standard dose of a drug where they have increased sensitivity such as succinylcholine and mivacurium. [1, 2, 3, 4]. 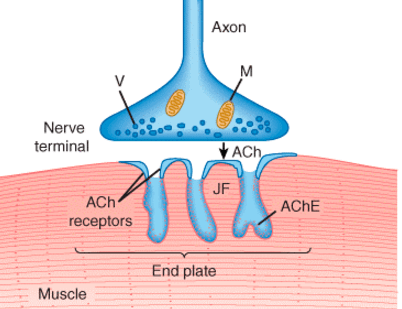 Patients who have this condition does not manifest any signs and symptoms aside from a previous sensitivity reaction with succinylcholine. The only sign and symptom that they manifest are their muscles become paralyzed and they are unable to breathe on their own when succinylcholine is given.

Respiration support through mechanical ventilation may be required until the medication is fully eliminated from the body and the patient is able to breathe on their own. A person who have this condition but is not exposed to a choline-derived anesthetic agent, they may not be aware that they have this condition [1, 2, 3, 4].

The enzyme pseudocholinesterase is primarily composed of glycoprotein and is produced by the liver. Its main function is to hydrolyze exogenous choline esters. 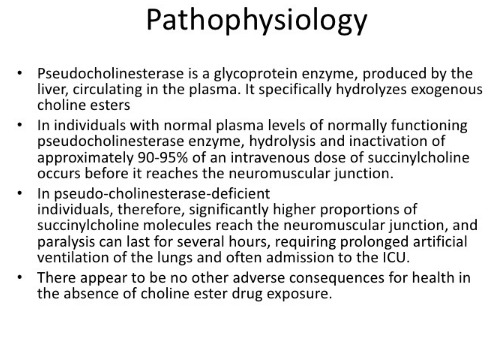 A deficiency of this enzyme will result in a delay in the metabolism of medications such as succinylcholine, mivacurium, cocaine and procaine. Of these medications, the use of succinylcholine may pose the greatest threat to the patient [1].

In those who have an adequate amount of pseudocholinesterase in their plasma, metabolism of about 90-95% of an intravenous dose of succinylcholine occurs before it reaches the neuromuscular joint.

The remaining amount exerts its intended effect to the acetylcholine receptor agonist in the neuromuscular joint. Succinylcholine will cause a depolarization that triggers the fasciculation of the skeletal muscle. A flaccid paralysis usually occurs after 1 minute.

In normal patients, the function of skeletal muscles returns around 5 minutes after the single bolus dose of succinylcholine has been given. This is due to the passive diffusion of active succinylcholine from the neuromuscular joint [1].

Patients with a deficiency of the enzyme have a higher amount of active succinylcholine left in the neuromuscular joint. This would result in a longer duration of the paralytic effect which may last for up to 8 hours.


This condition is typically discovered after the respiratory and skeletal muscles fail to spontaneously resolve after succinylcholine is administered as an adjunct paralytic agent during the induction of the anesthesia [1].

This deficiency is an inherited autosomal recessive trait. The faulty gene that causes this condition is identified on chromosome 3 [2]. 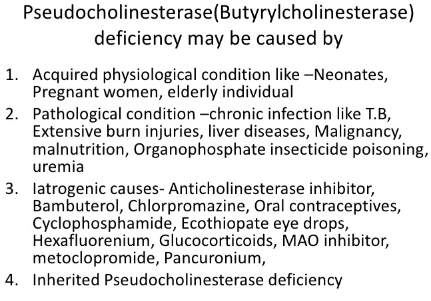 Genetic medical conditions are determined depending on the combination of genes for a trait obtained from the father and mother. A recessive genetic disorder is acquired when the same abnormal gene for the same trait is obtained from both parents.

When an individual obtains a normal gene and an abnormal one for the same trait, he does not acquire the condition but he becomes a carrier. The risk for 2 carrier parents to pass on the condition is 25% with each pregnancy.

There are also certain medical conditions that can affect the activity of pseudocholinesterase in the body. These include [1]:

When a patient manifests with prolonged respiratory paralysis after the administration of succinylcholine, there are several measures to manage the patient’s condition.

Artificial respiration through mechanical ventilation is the mainstay treatment for the paralysis of the respiratory muscles is resolved. The patient will recover once the succinylcholine has diffused from the neuromuscular joint [1, 2, 3, 4].

A prophylactic transfusion of fresh frozen plasma may be given to patients with a known pseudocholinesterase activity that needs to undergo a surgical procedure. One of the possible risks of this method is the possibility of some iatrogenic viral infectious complications [1, 2, 3, 4].

The use of a cholinesterase inhibitor, such as neostigmine, may be possible for reversing the succinylcholine-related respiratory paralysis. However, its use has been controversial due to its transient effect and the possibility of an intensified neuromuscular blockade [1, 2, 3, 4].

The prognosis for the recovery of these patients after the administration of succinylcholine is excellent provided that the patient is given adequate respiratory support and is closely monitored. Unaware individuals with this deficiency who are exposed to cocaine may experience sudden cardiac death [1].