Pearly Penile Papules - Removal, Treatment, How To Get Rid, Pictures
Skip to content

What are Pearly Penile Papules?

The Pearly Penile Papules are also medically termed as Hirsuties coronae glandi are tiny dome-shaped, benign growths bump skin that appeared to be pink, white, yellow or translucent in colour. The size of the papule are usually small range from 1-2 mm wide by 14 mm long and usually situated circumferentially in one or several rows.

Although this is not associated to any pathological condition is often misinterpret to be transmitted sexually instead they are considered to be normal and unrelated to any sexual activity.

Different clinical studies have released since of 1999, it is estimated of incidence rate ranging from 8 to 48 percent of all men have the checked to have the appearance of Pearly Penile Papules.

The Pearly Penile Papules today’s are considered to be the vestigial remnants of the penile spine from human ancestors as well as to other species. Over the changes of time, most human species lost them and totally fade away. However, in a small portion of population still shows the genetic characteristics of pearly penile papules.

Medical experts still aren’t sure why males have occur PPP. Since, the appearance of Pearly Penile Papules are normal anatomic variant. It is clearly not related to any sexual activity or lack of hygiene at all. The appearance of this penile papules are not infectious nor contagious and not considered to be malignant tumour.

Some experts suggest that the occurrence of penile papules could possibly of hormonal imbalances, excess or shortage of some nutrients and compounds in the penis. Nonetheless, as of this today the medical field have not been able to find suffice and satisfactory answer to the question why PPP occur.

In order to accurately diagnosis if it is the papules appeared around the shaft of the penis, patient can easily obtained the information either from dermatologist or trained physician. Some differential diagnosis or known to be the elimination of possible alternative condition are the following conditions;

It is not consider also to be lesions-like like of molluscum contagiosum are typically to be larger in size and shape and has sometimes appeared to be pink in colour.

While, ectopic sebaceous glands and lichen nitidus are both exactly can be found on the penile shaft but they differ in terms of texture and appearance. In ectopic sebaceous glands are usually appeared to be yellowish in colour and frequently discharge a chess-like material. On the contrary, lichen nitudus are usually tend to be flat-topped and have distinguish polygonal shape.

If the differential diagnosis is still uncertain, a biopsy can be performed which a tiny portion of the skin will be scraped and will observe under microscopic anatomy.


Removal/Treatment (How to Get Rid) 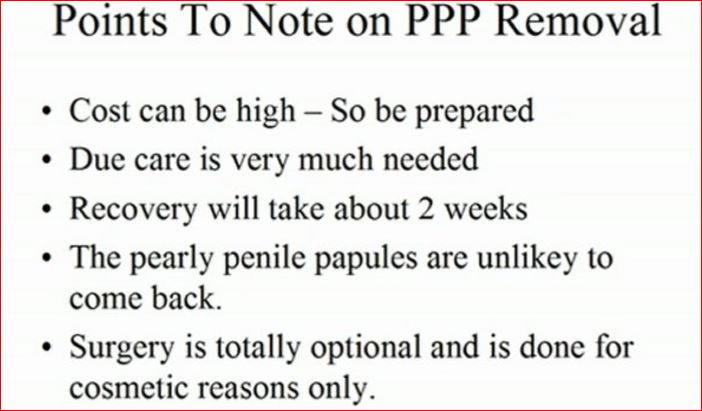 The pearly penile papules pose no risk at all to men’s health, some of men’s sexual partners considered the appearance of the papules to be aesthetically displeasing but others find it appealing. In many instances, most of the men prefer to get rid of them due to its unusual appearance.

There are numbers of medical ways to completely remove the papules such as follows;

Males with pearly penile papules can have Co2 laser surgery. This procedure is perform by the surgeons using highly targeted carbon dioxide lasers in order to produce beams of infrared light. Then, the infrared light will disintegrate the papule tissues at molecular level. This technique is the most commonly used as a surgical option in treating the pearly penile papules.

on this surgical procedure, the surgeon are require to use high dose of radiation to specifically targeted the ionize tissue, which produces free radicals that harmful to the cells. It consider to be less effective than Co2 laser surgery but more accurate than excisional or hyfrecator surgery.

Based from its own word of freezing, the papules are being frozen by using liquid nitrogen which eventually fall of on their own after at some freezing point. Most of the patient do not prefer on this treatment since the success is very low and some complications have reported that it affects some other tissues of the penis.

Such as regrow of the papule again and again. If patient subject himself repetitively in “cold therapy” his penis will be rendered to be out of action or totally dysfunctional within a few months.

This technique has minimal accuracy since the surgeon uses scalpel or lancet to cut and remove each papule one by one. It is consider to be less effective than others since it may end up damage on the surrounding tissues of the affected area. Furthermore, it scraping single papule will cause excruciating pain.

This approach is another painful process since the papules are subject for desiccation or putting it in a state of extreme dryness by using electric current. After this is done, the remaining tissues is remove by scraping or scooping using surgical instrument. During and after the surgery, patient is expected to suffer from manageable pain. 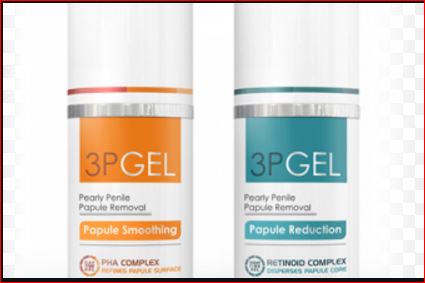 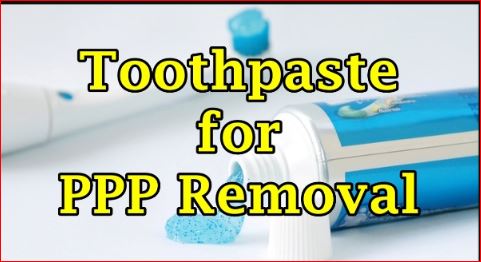 PPP can occur regardless of their geographic location, race or even sexual preference. But reports emphasize that most of the uncircumcised males are prone to have the penile papules over the age of 20 to 40 years of age.

There were cases reported that males reaching puberty have started to develop the penile papules although it can be so small at first, some of them realise it until much later in their life.