What Is Birth Control Implant?

Nowadays, there are still emerging difficulties in the appropriate pregnancy planning, as well as higher incidence of the unwanted pregnancies. That is particularly evident in the set of new effective long-acting reversible contraceptive (LARC) methods (intrauterine devices, hormonal implants). There are numerous hormonal contraceptive methods available such as oral contraceptives (birth control pill), injections and Birth Control Implant devices.

There are described numerous barrier methods that include the following: spermicide products, preservatives, female condoms, diaphragm, cervical cap etc Their mechanism of action is the prevention of pregnancy through inhibiting the ovarian egg to interact with sperm. Such methods are not as effective as oral pills or hormonal therapy and show higher incidence of failure.(1)

The abstinence is the only 100% effective method of pregnancy prevention. It is defined as the lack of desire in partners that do not want to have sexual intercourse. It is consisted of the avoidance of vaginal intercourse, oral as well as genital contact.

Intrauterine devices are positioned in the uterine cavity. Their main role is to provide the long-term contraception. Such function is maintained by preventing the fertilisation.

The most commonly applied device is the one that is comprised of copper. There are as well devices with levonorgesterol, a progestin. In case of the presence of intrauterine devices, the rate of ectopic pregnancy is higher.

Intrauterine devices should be exteriorized upon the five years of their placement in order to prevent any possible complications. The most common complications are pain, bleeding, uterine perforation, amenorrheas, pelvic infection and loss of consciousness.

The most common side-effects of the levonorgesterol are headache, acne, breast tenderness and ovarian cysts formation. The intrauterine devices are not contraindicated in women that are breastfeeding, upon a pregnancy, diabetes, HIV infection.

The intrauterine device are the gold standard of contraception in women with a previous medical history of thromboembolism, respiratory embolism or coronary disorders. The placement of the intrauterine devices should be prolonged in patients with a genitourinary tract infection or vaginal bleeding.

Oral birth control pills may be administred in order to prevent pregnancy. It has been proven that such medicaments are safe and effective if prescribed adequately. Prior to any prescription, it is advised to undertake a Papanikolau smear. 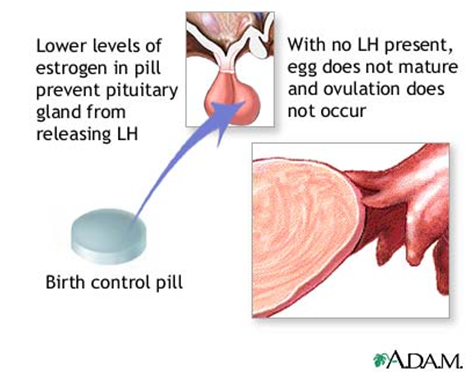 The administration of birth control pills is a hormonal method of contraception that consists of estrogen and progesterone or progesterone alone. Its function is to prevent the release of a mature ovarian egg, thickening of cervical mucosa as well as the histological changes of the uterus. Their proven effectiveness rate has been estimated at.

Birth control pills are prescribed once per day at regular interval. In the first month of their use, it is necessary to use condom during sexual activity o when on antibiotic therapy.

The most common side-effects of birth control pills are as follows: breast tenderness, nausea, higher incidence of headaches, change in the mood, weight fluctuations, spotting.

A transdermal patch is a device that releases hormones via the skin layers. It is in the form of a thin, smooth and yellow or beige patch. Transdermal patch prevents the release of a mature egg. In addition, it causes the thickening of cervical mucosa, changes in the anatomy of uterus. 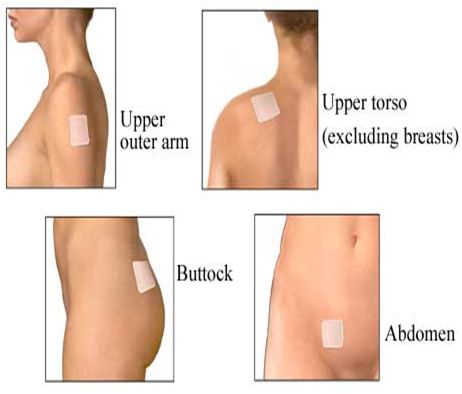 Devices are positioned in the body and are able to prevent pregnancy. The procedure of mere Implantation Birth Control is performed in approximately 15 minutes.

The diaphragm represents a flexible rubber cup that contains spermicide substances. It is mainly self-inserted over the cervix before the sexual intercourse. Afterwards, it is recommended to stay in that position for few hours upon the intercourse. The diaphragm must be prescribed by healthcare professionalist and monitored at regular intervals.

Cervical cap is a latex barrier that is inserted in the vagina prior to sexual intercourse. It fits around the cervix with the suction ability. It should be filled with spermicid substance prior to intercourse and stay in the female organism for approximately 48 hours. 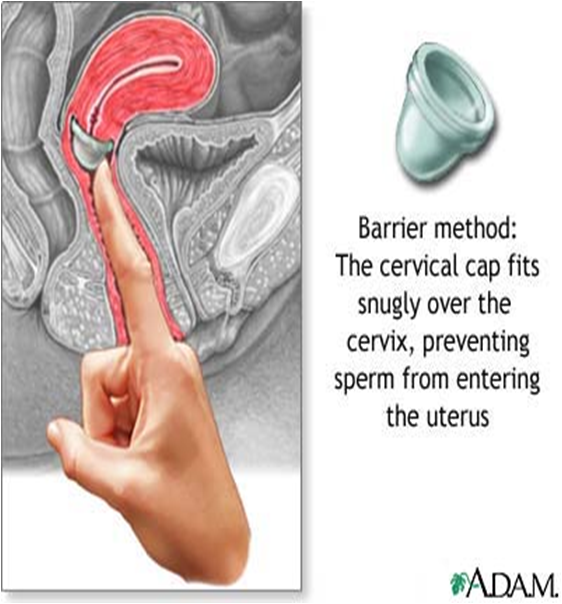 The application of vaginal ring is the insertion of a flexible ring in the vaginal space. In the next 3 weeks, vaginal ring releases certain hormones locally in order to prevent the release of a mature egg.

The advantages of the vaginal ring is its reversible attributes and high effectivness, In case of its application, there is no need to apply everyday contraception methods. It has been shown to effectively regulate the menstrual cycle and shows benefits similar to oral contraceptive methods. 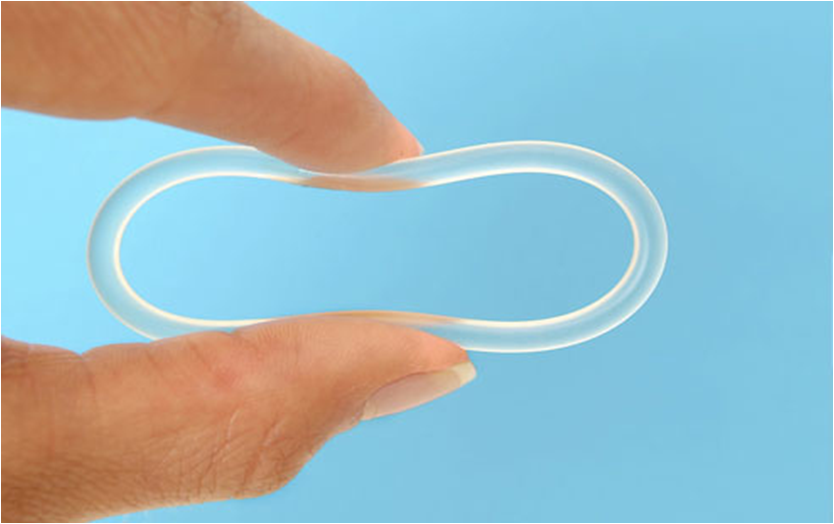 Disadvantages of the vaginal ring are the fact that they do not prevent sexually transmitted disease, cause irregular pattern of bleeding or spotting, headache, malaise, fatigue or breast lumps. In certain cases, the ring may be expelled from the vaginal space. (2)

It represents an injection injection of progestin administered every 12 to 13 weeks in females. It prevents the release of a mature egg, thickening of cervical mucosa as well as certain changes of the uterus. 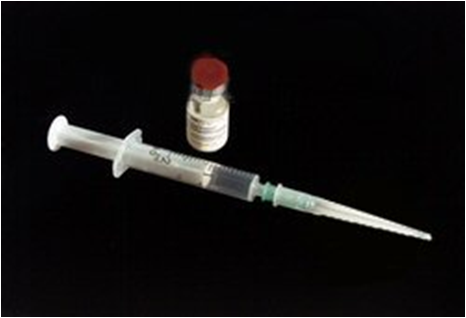 Its advantages are the fact that they are the effective reversible birth control method. It does not contain estrogen, and there is no necessary daily contraceptive method. If combined with other contraceptive modalities, their effectivness is not impaired.

It has been shown that they are able to improve the symptoms of endometriosis and to reduce the risk of endometrial cancer.


The disadvantages are the posibility of the initial, irregular bleeding, lower bone density and weight gain.

It is T-shaped object that is positioned in the uterus in order to prevent pregnancy. Such devices are extremely effective and prior to their insertion it is necessary to have experienced a natural childbirth and to be in a monogamous relationship.

It has been noted that there is a less than 2% chance annually for the progesterone intrauterine devices and less than 1% possibility per year for the onset of ectopic pregnancy and uterus perforation, as well as the chance for sexually transmitted disease.

The intrauterine devices should be prescribed and inserted only by professional healthcare provider. (3)

It has been concluded that in females in the reproductive period, the application of LARC methods is still unsatisfactory.

There are many advantages when it comes to using implant birth control and they include:4

Having looked at the advantages of birth control implants, it would be important to look at their disadvantage. Using contraceptive implants will not protect you against STDs, so you will need to use a condom every time you have sex to get protect from these diseases. Other disadvantages include:4

One reason why the implant is considered so effective is because there is little chance of making a mistake. It is inserted in your arm and therefore, you cannot forget to it or you cannot use it incorrectly. The implant protects you against pregnancy everyday for about 3 years after which it is required to be removed by a doctor. Once removed, you can become pregnant right away.5

It requires you to visit a doctor to have the birth control inserted into your arm. A doctor conducts a physical examination before they insert the birth control implant under the arm. Usually, it is inserted on the skin under the upper arm. Once it has been inserted, it can stay there for about 3 years during which time it is effective in preventing pregnancy. It only takes a few minutes for the doctor to insert it and because a local anesthetic is used, it makes the procedure to be painless.

Following the procedure, you are sent home, and a small bandage is used to cover the insertion site. The doctor may decide giving you a pressure bandage which you can take it out after 24 hours. You may experience some pain, bruising, scarring, or bleeding at the area where the insertion is made. The implant is removed after three years, however, the removal can be done earlier if you wish. During the removal, the doctor is first going to numb the arm and make a small incision before taking out the implant. If you need another implant, it can be inserted at that time. 4

Using birth control implant or Nexplanon is a safe method to protect you from pregnancy. Being a tiny-rod inserted under the skin on the upper arm, it gives you less worry. It contains and releases progestin, but it’s estrogen free. Birth control implant keeps the ovaries from releasing eggs while also thickening the cervical mucus to help block sperms from reaching the egg. Once it’s inserted, there is nothing to do on your part, so it’s that easy to use – just leave it to play it’s part. It will remain there for around three to four years before it is removed.

If the implant is done within the first five days from the time you had your period, then you are lucky, it will work from that time of insertion. However, if you are not within the first five days window, then you will need a backup method to prevent you from pregnancy, at least for the following week. You can use condoms, sponge, diaphragm, internal condoms, or emergency contraception.

You want to read birth control implant reviews to see what people say about their use. However, looking at them generally, they are so effective. There are also side effects which you may want to note if you are using the implants. For example, you may experience irregular bleeding, and this is commonly seen within the first 6 to 12 months. It may be heavier periods, spotting occurring between periods, or irregular bleeding occurring entire time of implant. Some women may not get periods for a while.

There may be less common side effects such as hair loss, nausea, nervousness, ovarian cysts, acne, change in sex drive, sore breasts, dizziness, depression, and pain at time of insertion.7

It can cost you from say $0 to something like $1300, however, you need to understand that if you have health insurance, for example Medicaid and other programs, you may get the implant for free or for low amount. The cost of removal is somewhere between $0 and $300, again it will depend on whether or not you have health insurance. The good thing is that even if it costs you compared to other methods, it can save you money in the long run because it gives you protection for up to 3 years. Most insurance plans are now required to cover birth control meaning you may not have out-of-pocket costs on your side.6 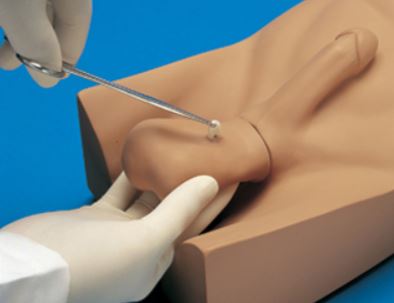 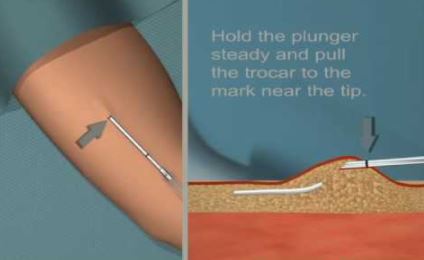 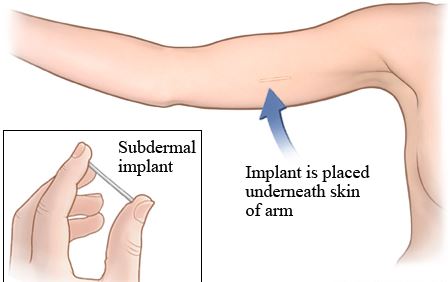