What is Cerebral Edema?

The term edema is medical speak for inflammation or swelling, and it is a normal response by the body to infection or injury. When body tissues are injured for any of the previously stated reasons, they release chemicals which cause blood to leak into the tissue resulting in a swelling. The swelling is supposed to isolate the affected area, which is later attended to by white blood cells which destroy the affected cells and the pathogens. 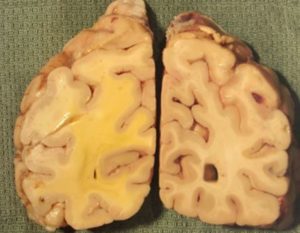 Now, that’s easy to understand for a normal injury like a scrape on your knee or a cut on your finger, but what about the brain – what happens when there’s a similar response in your brain? Well, the immune system and the basic structure of the brain cells is no different from those of any other part of the brain, so these brain cells will react in the same way, causing a swelling. This is what is referred to as a cerebral edema, brain edema, elevated intracranial pressure or simply, brain swelling. [1]

Swelling on any other part of the body is easy to deal with – just stick a bandage on it if it’s a big cut and clean regularly, but the brain is ensconced within the skull. The skull was meant to prevent damage from external factors and is responsible for keeping the brain safe, but when there’s a cerebral edema, the skull becomes the enemy. This shell that protects the brain now becomes the barrier that restricts the brain tissues from swelling and fighting off the inflammation, leading to increased intracranial pressure which then leads to various problems.

First, because the pressure of the swelling can’t be exerted outwards, it is turned inwards, causing pressure within the brain itself. This causes restrictions on blood vessels in the brain and considering that almost 20% of the body’s blood is pumped to the brain, you can imagine the amount of pressure that builds up. Second, it’s not just blood supply but also excretion that is restricted. Brain tissue generates waste, just like all other body tissue, and this restriction causes the waste to build up within the brain and not being able to be removed.

Now, you have got a brain starved of nutrients and waste building up, yet the lack of adequate inflammation for the white blood cells, which are supposed to reduce the inflammation, keeps making the situation worse. In this state, an individual begins to experience several symptoms given that the brain is the body’s control center. [2] 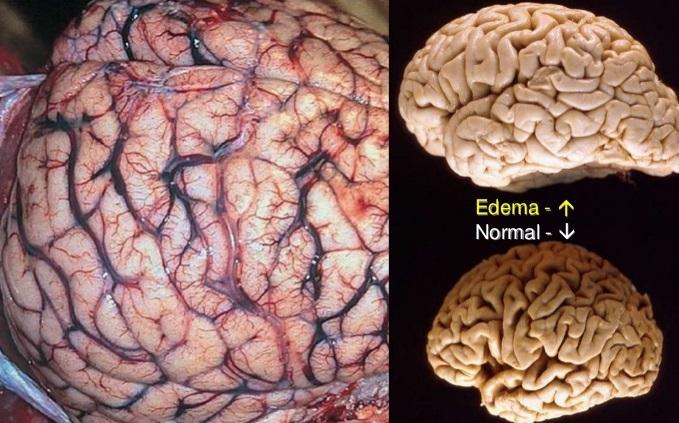 The above symptoms can have a sudden onset, although it depends on the underlying cause of the swelling. However, the severity of the symptoms will only get worse over time until the cause is addressed. [3]

What can cause a Cerebral Edema?

There are many reasons that can lead to a swelling on the brain, but they can be categorized into a few causes: [4]

This is an injury caused by direct trauma to the head leading to a traumatic brain injury (TBI). Although the skull is available to protect the brain from this kind of TBI, it doesn’t prevent the brain itself from experiencing the trauma. Think of the brain as a bottle of water, after all, it’s made up of 73% water, by dropping the bottle, the water is still not contaminated, but it was certainly shaken up; this is exactly what happens to the brain as the result of a TBI. The brain matter is rattled and thrown against the inside of the skull, causing inflammation due to the impact. Sometimes, if the impact is strong enough, pieces of the skull may break off and rupture blood vessels in the brain.

A stroke can be hemorrhagic or ischemic, whereby the former leads to leaking of blood and the latter a blockage of blood vessels due to a clot. When there is a clot, brain tissue does not receive the necessary amount of oxygen and begins to die, so the body reacts by an immune response. In the case of a hemorrhagic stroke, leaking blood directly causes increased pressure within the skull which is also accompanied by swelling as the body tries to stop the leak.

There are many types of infections with varying pathogens, but whenever such an infection occurs, it leads to a swelling. This could be due to bacteria, viruses, parasites which cause the brain tissue to become filled with pus and increasing pressure.

A tumor is an abnormal growth, and this can also cause increased pressure in the brain leading to increased intracranial pressure.

Diagnosis and Treatment of Cerebral Edema

When a patient experiences any of the above symptoms, a doctor can confirm the presence of a cerebral edema through a physical examination which checks for neurological responses and head and neck exams. These are done first to rule out other causes of the symptoms since cerebral edema is often accompanied by altered brain functioning.

Next, blood tests are done to check for any possible causes – infections and tumors can be identified by the presence of antibodies in the blood. Finally, imaging technology through CT and MRI scans are done to show the extent, location and other possible causes of the swelling such as a stroke which can’t be seen in a blood test. [5] 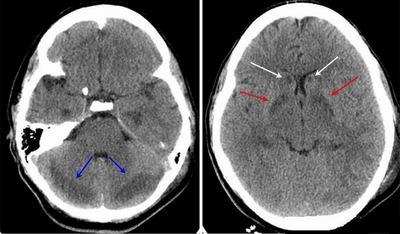 Presentation of Cerebral Edema on a CT-Scan

In the more severe cases, medical procedures may have to be performed to relieve the pressure immediately. This may be through surgery to remove a part of the skull or repair the damaged artery, providing oxygen through a respirator or fluids through an intravenous line to keep blood pressure up.

Urgent medical care for cerebral edema is crucial because the brain plays a very important role, and delayed action can lead to permanent damage of the brain tissues which can have devastating effects in the long run. [6]