When the human body fails to absorb fats through the intestines (the small intestines), the body eliminates them from the stool. 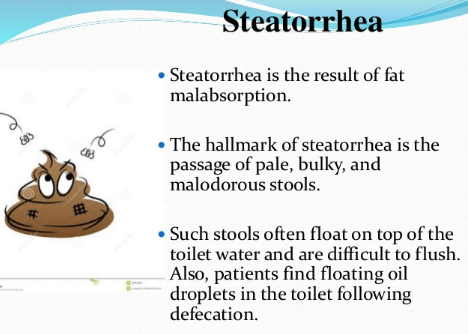 Steatorrhea is caused by:

Diseases that cause a deficiency in conjugated bile salts (which are crucial for digestion of fats) such as hepatitis, primary biliary cirrhosis and extrahepatic biliary obstruction lead to malabsorption of fats causing steatorrhea.

Taking of excessive alcohol can also make you susceptible to alcoholic liver disease, which can damage the liver and impair its normal functions and therefore lead to steatorrhea.

Gastroschisis (when intestines develop outside the body before birth), necrotizing enterocolitis (inflammation of the intestine and loss of blood flow leading to damage to the intestine) etc. 4 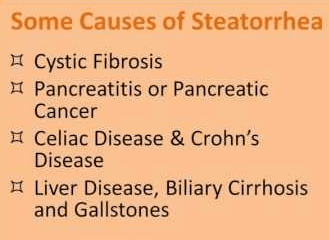 Zollinger-Ellison syndrome is caused by gastrinoma, which is basically a tumor occurring on the pancreas or the duodenum. It then causes excess production of acid (hydrochloric acid) in the stomach.


When pancreatic enzymes such as Lipase that is responsible for digesting fats and lipids, when this enzymes are exposed to this acid they become inactive leading to less absorption of fats and causing steatorrhea.

Intestinal stasis can be caused by diabetes or scleroderma. Which means food content in the intestine is not being pushed properly through peristalsis, and bacteria may develop Such bacteria metabolize bile acids early in the small intestine instead of this happening in the large intestine and therefore affecting digestion and absorption of fats causing steatorrhea.

Parasitic infections such as giardiasis, isosporiasis and strongyloidiasis are caused by parasites that damage the brush borders of the intestinal lining and therefore inhibiting fat absorption. In cases where the cause of the steatorrhea is unexplained, giardiasis should be considered as the giardia lamblia parasite has either destroyed the intestinal mucosa or deconjugates the bile acids early.

6. Some drugs and food intake

Some drugs and food cause steatorrhea. Taking of excess whole nuts can lead to fat in the stool as lipids in whole nuts is less properly absorbed as compared to their nut butters, oils or flour. Medication also cause steatorrhea by inhabiting the absorption of fats within the body, such drugs include Orlistat (a diet pill), Vyotrin is said to cause steatorrhea among some people, Para-aminosalic acid (antibiotic used to treat Tuberculosis), Colchine (used in treating gout and heavy doses can cause gastro-intestinal upsets), Tetracycline and Neomycin, laxatives as well as weight loss drugs. 5

Indicators for steatorrhea are: 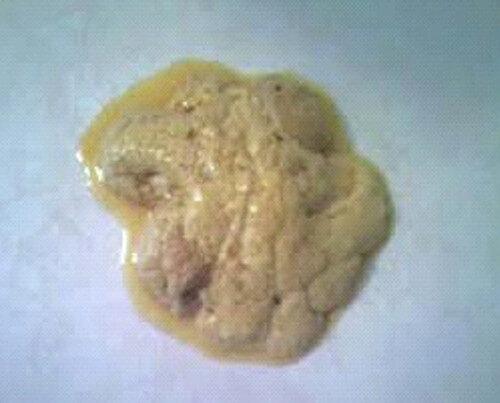 The following methods are among some which are used to treat steatorrhea:

Steatorrhea is not a medical condition but a symptom of some underlying medical condition- it can also be harmless such as when taking of whole nuts is considered a cause. To filter out harmless occurrences diagnosis of steatorrhea is done in 72 hours, here fecal samples are delivered per day for 3 days for analysis.