Splinter Hemorrhages - Pictures, Causes, What Is, Symptoms,Treatment
Skip to content

What is a Splinter Hemorrhage?

Splinter hemorrhages, also known as fingernail or toenail hemorrhage, are small bleeding areas at the nail beds or the hyponychium of the nail unit.

They look like thin lines of reddish-brown or sometimes even a darken to black color under the nails and they usually run in the direction of the nail growth, that is vertically. The color of splinter hemorrhages usually progress from light to dark, that is from red to brown then to black. 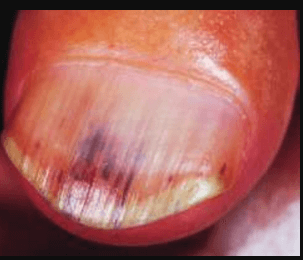 The skin under nail surface, which is called the nail bed contains small blood capillaries that supply and take away blood from the region.

In the event that the capillaries burst, there appears a tiny bleeding point and this can be seen through the nail plate. The condition is given the name splinter hemorrhages because it tends to form subungual, dark, linear strikes that are seen through the nail. In fact, they look like splinters under a nail.

Usually, there is no discomfort or pain associated with this condition, unless there has been physical trauma like a bang to a fingernail. When these strikes develop without having any injury to your fingernail, or if they don’t disappear, there could be another underlying cause.

Again, if the strikes appear on several nails for no obvious reason, it is advisable that you see a doctor. 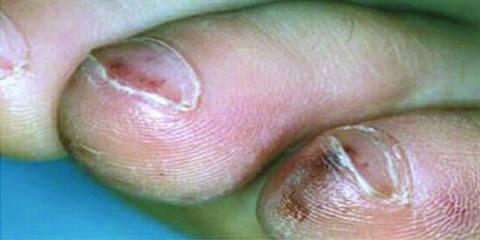 Splinter hemorrhages may be caused by small clots that damage small capillaries under the nails. One may have blood trapped by the overlying nail plates after bleeding.

This condition can occur with the infection of the heart valves (endocarditis) or the swelling of blood vessels (vasculitis), which damage small capillaries (microemboli). It is also known to appear in the late stages of endocarditis.

However, the condition is not that serious as blood that has been trapped in the overlying nail plate disappears with time; usually it takes 3-4 months, as the nail continues to grow. When the splinter hemorrhage appears in many of your nails, it may be a sign of some systematic disorder such as Raynaud’s disease or connective tissues disorder such as lupus or scleroderma.

When one gets a nail injury or trauma, this can cause bleeding and the blood trapped on the overlying nail plates, causing the condition.

Having autoimmune medical conditions such as systematic lupus erythematosus, scleroderma, rheumatoid arthritis and nail psoriasis are a likely cause of the ailment.

For example, nail psoriasis is a condition where there is thinning of the epidermis layer of the nail bed, hence making the blood vessels not to be located deep in the tissues of the nail bed making it vulnerable to the situation.

Certain medications: Use of some of medications such as anticoagulants like aspirin can slow down coagulation process of blood, hence leading to splinter hemorrhages. Other medications that may also affect are non-steroidal anti-inflammatory drugs such as ibuprofen.

This is a type of disease where the patient has oversensitive toes and fingernails that react when exposed to very low temperatures. Due to the cold whether the tips of the nails appears whitish or bluish as an indication of poor blood circulation.

This is a disease of the heart valves where one gets infections that cause clots to break off making the infected blood to circulate in the body.

Over-reactive thyroid disease, also known as thyrotoxicosis, also can be an indication of splinter hemorrhages that has persisted over a period of time.

People suffering from diabetes may also get this condition when they do not control their sugar levels.

Fragments of cholesterol can block the capillaries of the fingers, hence causing blood splints on the nail.

Some causes may be taking oral contraceptives, or during pregnancy. This is however not commonly experienced.

Fungus infection of the nail (onychomycosis) can also be an effect of the splinter hemorrhages.

Symptoms of this condition could be as a result of the other diseases associated with it such as having endocarditis. One may experience:

While people with the condition may experience one or more of the above symptoms and signs, the condition does not however cause any pain or discomfort whatsoever.

That said, should there be pain or discomfort, proper examination is needed to determine the exact condition and what is causing the pain. 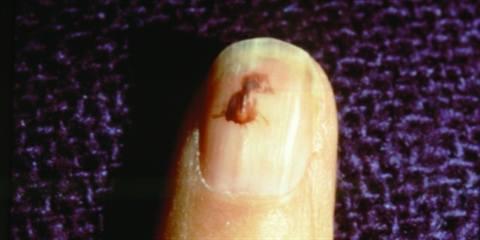 Diagnosis is mainly done by the rheumatologist and dermatologist. A doctor may want to know things like;

Tests and examinations can also be carried out such as:

The doctor would also be interested in knowing the patient’s medical history. All this is done to check on what is causing the disorder.

The easiest diagnosis is when one has had physical injury as it is already known to the individual and one can monitor the effect of the impact to the nails.

Treatment of diseases related to splinter hemorrhages such as thyroid disease, will make the symptoms disappear. Since splinter hemorrhages does not cause any discomforts or pain, one can use nail polish to cover it up. This reduces the emotional stress that the patient has due to the condition. 1