The tailbone, in Latin the coccyx, is a small, triangle-shaped bone at the end of the spinal column. It contains usually 3-5 fused vertebrae that form one flexible complex, which allows front-back movements in range of 13°.

In humans it is a part of rudimentary tail and only has a role in stability of the pelvis and a place of attachment for many important muscles and ligaments, but it is also of importance to know when and how it can be injured. The tailbone is located at the back of the pelvis, as a posterior wall, between the buttocks, and this is the place where it can easily be injured. 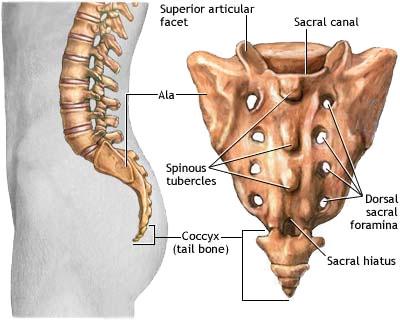 Tailbone injuries vary from a bruised tailbone as a lighter injury to broken tailbone which happens when a great pressure is put on the bone, enough to break it or dislocate and luxate it. The injury may be on the muscles or ligaments, causing some swelling and pain which are lesser than when the bone is injured. (1)

The cause of tailbone injury may lie in bad posture during the day: sitting or lying in uncomfortable position, on a hard surface, in which the tailbone is pressed. It can also be compressed when a person falls from some height on the bone, applying great pressure quickly, which then may be very painful.

In some sports, there is a constant pressure on the tailbone, for example in bicyclism or a sudden hit in the tailbone. In any situation where there is a sudden fall on a narrow, hard object, which happens also when children sit suddenly on a toy, there is a possibility of injury and even breaking the bone because the bone complex flexibility has reached the point which it can’t endure. 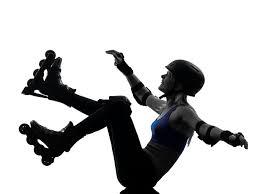 During difficult childbirth, a woman may stretch the pelvic bones to facilitate birth and in the same way induce injury to the spinal ending. The coccygeal bone moves to the back to allow a child’s head to pass through the vaginal canal. In this position, the bone is moving away from the pelvis and pushed on a hard surface of a table.

There are cases when the cause remains unknown and the pain relieves on it own spontaneously, and some people may be predisposed to injuries due to different anatomical structure and differently fused vertebra. Being over or underweight is also a factor. People who lack vitamin D, and have bones with low density are also predisposed to break the tailbone. (2)

Usually, if a person experiences pain that is mild to moderate, they wait for the pain to be gone, and if the symptoms are not relieved after a couple of days or weeks, they seek medical advice.

The diagnosis of Tailbone injury is performed with history and clinical exam, which is usually enough, if there are information about injury that may have affected other areas and surrounding organs, then a doctor may perform ultrasound, some urine tests, neurological exam and rectal exam. If the doctor suspects the fracture of tailbone he/she may order an X ray of the lower spine. 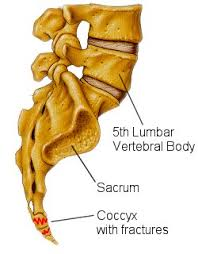 Figure 3 – Fracture of the tailbone, which is usually without dislocation (5)

Differential diagnosis of Tailbone injury has to be made between bruised tailbone and broken tailbone and also the pain may not even be linked to injury but is rather caused by damage of the nerves from a near positioned tumour or any other mass, or an illness, which is why it is wise to consult your doctor if you have no memory of injury in the area.

In many cases, the Tailbone injury isn’t urgent and the person is relieved from pain after a couple of weeks, spontaneously. Treatment is conservative at the beginning where there is no suspicion of severe damage to the bone or other surrounding structures.

Conservative treatment includes applying cold (but not applying ice directly to skin, for posible freezing of skin), rest, but avoiding sitting, and if it is necessary it is good to relieve pressure from the tailbone by leaning forwards, and also the use of analgesics, special coccygeal cushions in shape of donut for sitting, physical therapy and a massage can be helpful.

The use of heat can also be beneficial, in improving circulation to the area in order to promote healing. The conservative treatment helps in 90% of cases. (3) Other types of treatments are surgical (in rare cases there is a need of removal of complete bone or fragments) or involve injection of anaesthetics or corticosteroids if the pain is persistent. It is also advised to eat food with lots of fibres to avoid having constipation and softening the stool, to avoid pain during defecation.

The prognosis is good. If the tailbone isn’t broken it will need 4 weeks for pain to be relieved and tissue to completely heal. However, if there was a fracture, healing will require 10-12 weeks. Fractured tailbone is left to spontaneously heal, with supportive therapy only. (4)